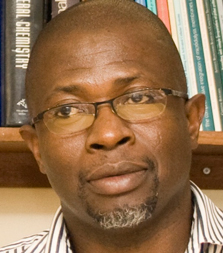 Nelson Torto is a Professor of Analytical Chemistry and the Head of the
Chemistry Department at Rhodes University. He graduated with a BSc (Hons)
from the Chemistry School of Hons of the University of Manchester Institute
of Science and Technology (UMIST), MSc Chemistry from the University of
Botswana and a PhD in Analytical Chemistry from the University of Lund
(Sweden). He has graduated over 13 PhDs and his research focus is on the use
of nanotechnology for the developing of colorimetric probes for diagnosis in
biotechnology, health, water and the environment. In 2008 he received the
American Chemical Society Young Investigator Award in Separation Science. He
has 1 international patent and filed 4 SA provisional patents in 2012.
Nelson is a Time To Think Collegiate, Facilitator and Coach. He is a
Director on the Botswana Innovation Hub Board as well as the Botswana
Technology Center Board. Nelson has given many keynote addresses in all
continents and is currently the Analytical Chemistry Editor for the SA
Journal of Chemistry, Chair of the South African Chemical Institute (SACI)
Division of Analytical Chemistry as well as the Founding Secretary General
for the African Network of Analytical Chemists (SEANAC). Nelson is actively
involved in aspects of nanotechnology application and has attended many
international exhibitions, symposia and panel discussions, in particular in
Asia and North America. Although Nelson is not running a practise, his role
as a research leader, Head of Department as well as his other various
advisory tasks in government enable him to apply aspects of the Thinking
Environment.